For those interested in strategy, adapting to a changing environment, consumer behavioral trends, and, well, outright mismanagement, then analyzing the newspaper and print media industry provides a real-world, in-progress case study.

Although headlines of the death of the newspaper might be an exaggeration at the moment, there is a clear and present danger.  The business model of newspapers depends on advertising revenue, which comprises about 80% of its total revenue.  In 2008, advertising revenue dropped 16.5%, according to the Newspaper Association of America.  Barclays Capital projects a 22.0% decline in advertising revenue in 2009 (see Mint.com below).  Startling, but also mirroring the economic recession.

Nonetheless, organizations that will most likely survive the economic challenges and thrive will create a new business model, with digital media being more prominent.  The extinction of the traditional daily is not likely in the near term, although it will probably play a more niche role.  Similar dynamics are occurring with telephones, internet connections, software, music, and movies, to name a few.

Mint.com presents a concise one-page visual of key metrics of the top 25 U.S. newspapers (see image below) in an infographic titled “Stop the Presses: The Death of the Newspaper Industry.” 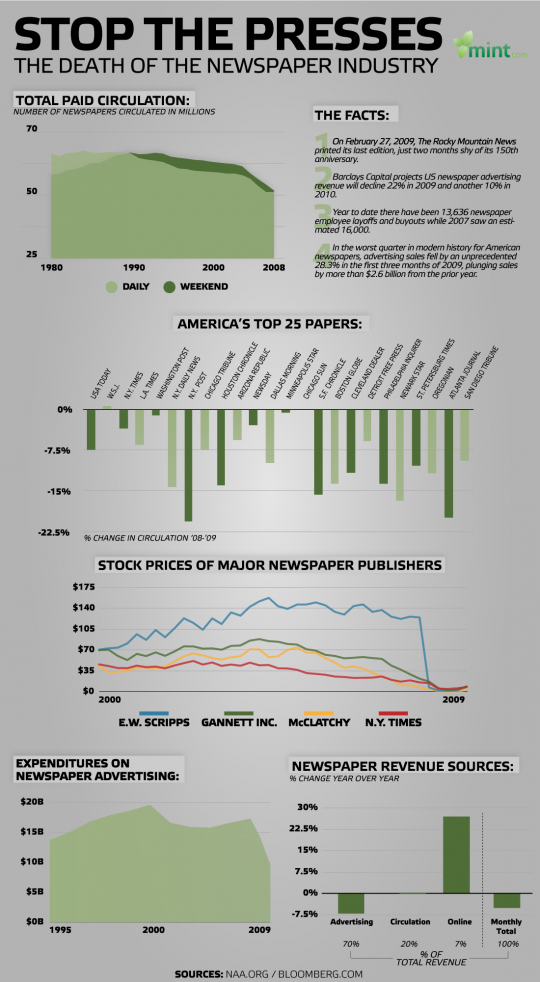 Many others have written about the struggles of print media including Coventry League; Slate.com highlights the strategic and mismanagement aspects of this topic.

Well, that’s all for now, as I need to check my favorite news and entertainment blogs.

2 thoughts on “Stop The Presses”