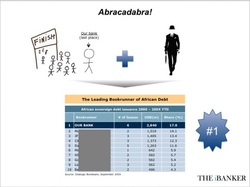 Source: TheiBanker.com
According to Thomson Reuters and the DealBook, edited by Andrew Ross Sorkin of the New York Times, the pace of worldwide M&A during the first quarter of 2013 was relatively slow.  The summary, highlighted below, reflects announced transactions and ranks them by value.  Goldman Sachs is on top of Thomson’s League Tables in both number and value of announced deals in the quarter.

For those who want a free, interactive graphic regarding investment banking activity, then reference the Investment Banking Scorecard compiled by Dealogic and the Wall Street Journal.

And, lastly, for a comical perspective on League Tables, spend a few minutes to read The iBanker’s blog titled “Lies, Damned Lies and League Tables.”  The art of presentation, however, is nothing new to bankers and the most discerning clients.