Skip to content
Danica Patrick announced her exit from NASCAR late last year and now there is talk about the majority owners of America’s premier stock-car racing series exploring a sale.  The company was founded in 1948 by mechanic Bill France Sr. and his grandson Brian France has been CEO since 2003. The France family is apparently working with Goldman Sachs to identify a potential deal for a buyer.

​Possible bidders include Marcus Smith, president of Speedway Motorsports Inc. (NASDAQ: TRK). Insiders say Smith wants to make his own legacy in sports, separate from his father Bruton. While the Smiths had interest in buying the Carolina Panthers, the $2 billion-plus price tag was too much for them to become majority owners.
​
Comcast (NASDAQ: CMCSA) is also bound to come up, not only because of its sponsorship of the Xfinity Series, but because the idea of a media company buying a racing series for content is fresh in minds after Formula One was purchased by Liberty Media (NASDAQ: FWONA), which reportedly spent more than $8 billion in January 2017 to acquire Formula One. Also, Comcast is already one of NASCAR’s most important partners, serving as both a media rights partner and title partner of NASCAR through its NBC Sports and Xfinity brands, respectively. NASCAR is such an important investment for Comcast that several people from the sport, including new NBC Sports broadcaster Dale Earnhardt Jr., were interwoven throughout NBC’s Super Bowl pregame show this month. Many sources inside the sport believe that Comcast sees great value in owning the content and in its future distribution.

While the France family owns NASCAR, the vast majority of tracks utilized by NASCAR’s three national series are owned by two publicly-held companies – International Speedway Corp. (NASDAQ: ISCA) and Speedway Motorsports Inc. (NASDAQ: TRK). Regarding ISC, Bill France Sr. started the company in 1953 to construct and manage tracks where NASCAR holds competitions. The France family controls about 74% of Combined Voting Power of Common Stock—Class A and Class B (Reference Form 10-Q for the quarterly period—Q1—ended 28 February 2018. Notes to Consolidated Financial Statements: 11. Related Party Disclosures and Transactions.). However, the France Family Group owns about 92% of the CLASS B COMMON STOCK as of 12 February 2018 according to a recent Schedule 13G filing. At the end of this post is last year’s Schedule 14C dated 07 March 2017 (we will update with 2018’s DEF 14C when it’s available), which discloses primary shareholders of each class of common stock.

Moreover, the France family has been backing the notion that NASCAR is undervalued with their own money. According to the latest filings, the family increased its holdings by over 18,000 shares of ISC as of 01 May, boosting their total holdings to 225,710 shares worth $9.5 million (insider purchases via the France family trust: 2010 BJF DESCENDANTS TRUST B is here).

The crown jewel of NASCAR and ISC is the Daytona motor speedway and the annual Daytona 500. The race track has undergone a huge renovation and the 500 sells out. The 500 is still a great brand. ISC, headquartered in Daytona Beach, Florida, like NASCAR, is operated in part by members of the France family – Jim France is chairman of the board while Lesa France Kennedy is CEO. Last month, NASCAR announced it was purchasing the Automobile Racing Club of America (ARCA) Racing Series headquartered in Toledo, Ohio in a deal that would be completed by 2020.

One Seeking Alpha researcher put together a bear case (January 2018)–but expected valuations can change significantly in an M&A deal:
​

Source data: financial metrics compiled from Yahoo! Finance (as of 09 May 2018). 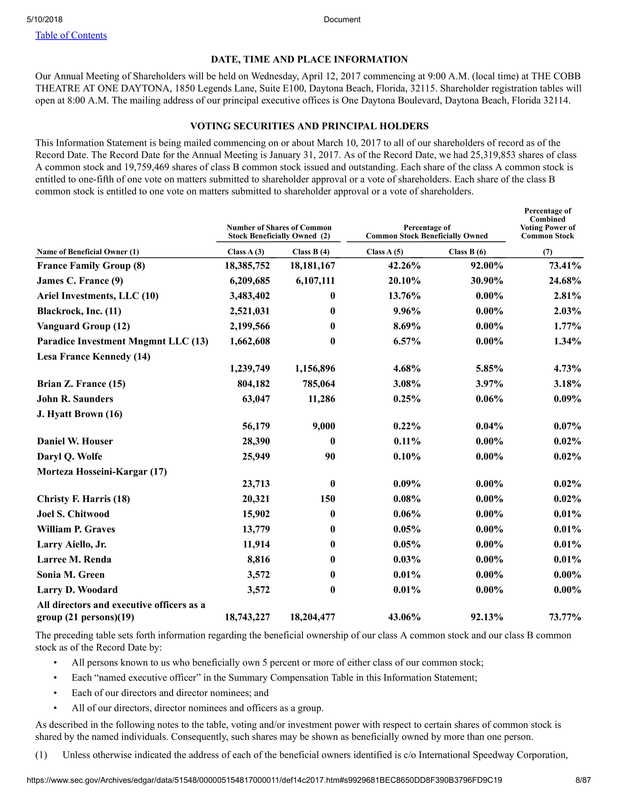 3 thoughts on “Fun With Merger Arbitrage (Or, Is NASCAR For Sale?)”