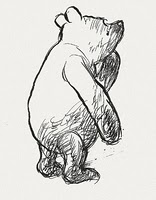 Winnie-the-Pooh
There is disagreement among economic observers regarding whether the economy is more likely to experience troubling inflation or deflation in the next couple of years.

Some who expect increased inflation reference current fiscal and monetary policies that, alone, are inflationary. Examples include recent government stimulus packages, historically low discount and federal funds rates, issuance of massive amounts of government and municipal debt, and expansion of the currency base, among other factors. Essentially, the more currency being created from nothing other than one’s good faith results in higher prices for goods and services (and a correspondingly lower value to said currency), ceteris paribus, to paraphrase my former economics professor.

As is the case with most theories I’ve been taught while sitting in an ivory tower, ceteris paribus is noteworthy concerning whether theories are useful practically.

According to many who expect deflation, the rationale references value of assets and social psychology.  Regarding the former, we’ve experienced the effects of decoupling the price of an asset and its underlying secured cash value.  There are many thought experiments.  Think of houses: if everybody had to pay cash for a house, home prices would likely be a fraction of what they are today.  If municipalities could not issue bonds at reasonable interest rates or assess taxes beyond a moderate amount, then their cost structure (compensation, pensions, contracts) and prices would be lower.  These are just two of many examples, albeit presented in a simplistic manner.

What we have experienced in the past two years regarding some banks, companies and municipalities is that the price they paid for their assets exceeded the current and ongoing value of those assets: residential and commercial mortgages, stocks, credit default swaps, and tax receipt streams, for instance.

As such, by printing more money and issuing more debt, inflation can be expected.  But, if debt of all kinds must be written down, some by 50% or even 100% (bankruptcy), then deflation is most likely to occur (prices of many goods and services decrease*).

So, the question to ask yourselves, Dear Loyal Readers, is “do you believe the current stated value of debt instruments and future obligations (on-and-off the balance sheets of companies and banks; derivatives; social security and pension funds; mortgages; credit card balances; sovereign and municipal bonds) accurately reflect reality?”

If your answer is yes, then expect inflation.  Otherwise, expect near-term deflation.

3 thoughts on “I Say Deflation; You Say Inflation”