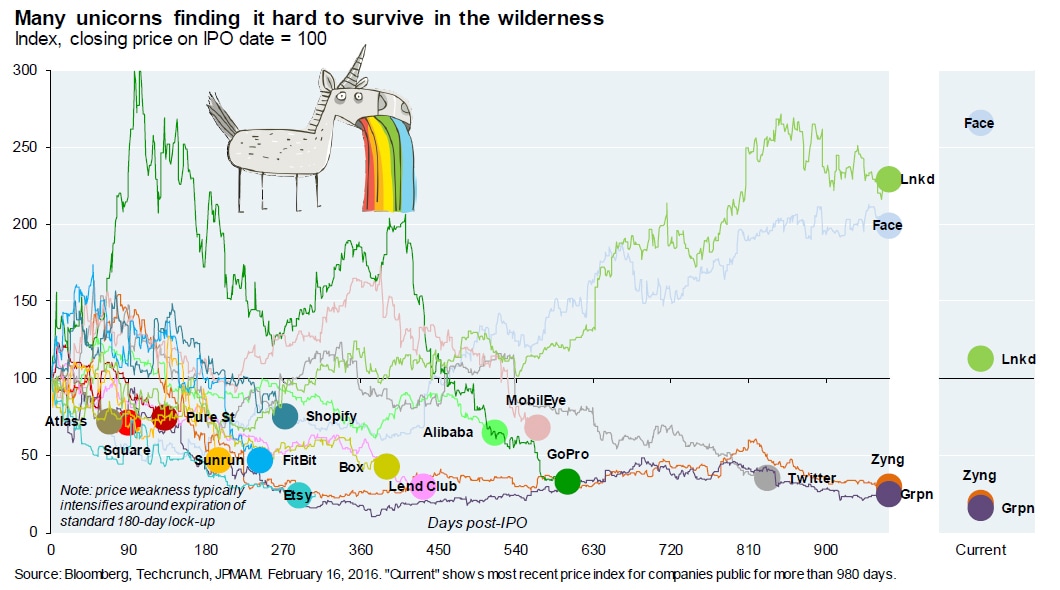 A bubble exists when asset prices rise beyond what incomes and cash flows can sustain.

As such, these two charts below about India’s consumer internet bubble, circa 2015, reflect our perspective that valuations of many asset classes are overvalued based on fundamentals. By the way, we were introduced to the source data by a Linkedin post by Anshuman Verma, founder and managing director of M1L based in Mumbai, India.

Here’s our facetious takeaway of the two charts: 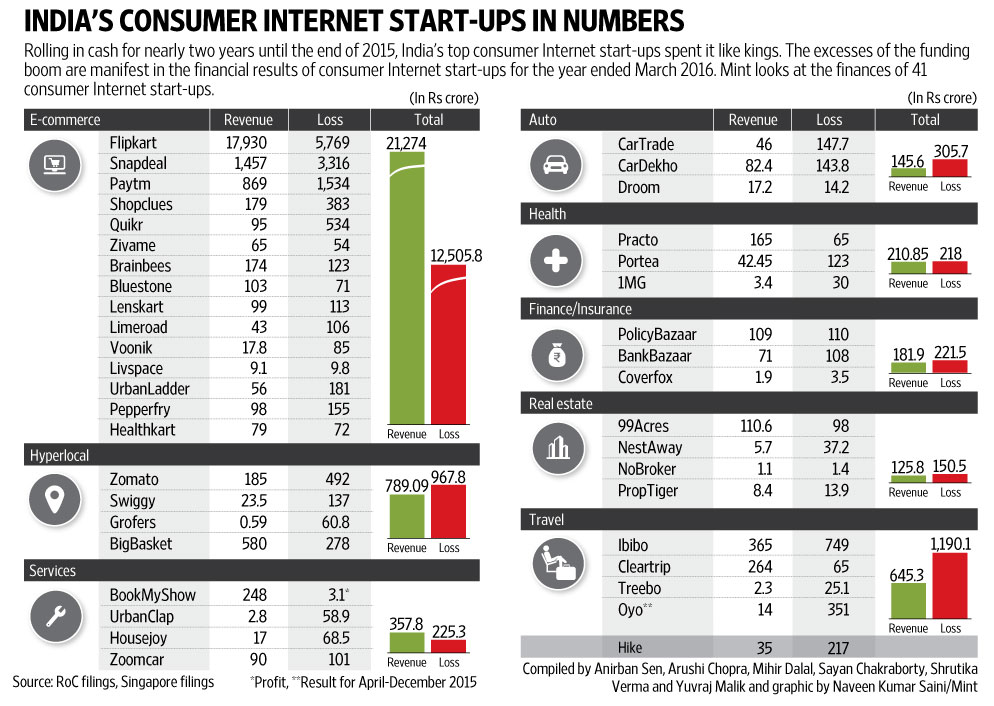 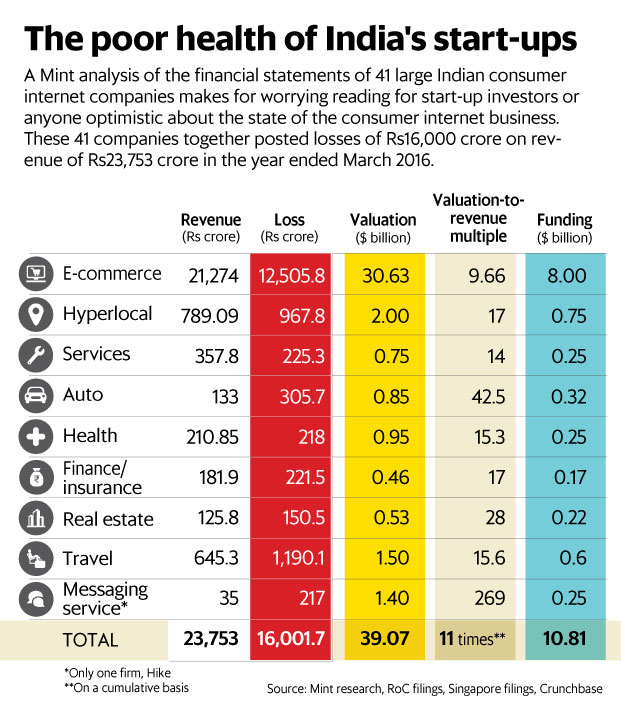 Peter Thiel—venture capitalist, co-founder of PayPal, and first outside investor in FaceBook—is bolder in his assertion stating that just about everything is overvalued:

​“Startup tech stocks may be overvalued, but so are public equities, so are houses, so are government bonds.”

We also commented on these themes in a few prior posts including “Was Dollar Shave Club’s Exit any Good?” from July 2016 and “Do You Need a Contract CFO or Investment Banking Kiosk?” from June 2014 (it also has a few relevant off links). Mark Cuban, a tech entrepreneur himself, stated that the current tech bubble is worse than the dot-com bubble of the late 1990s partially due to the lack of liquidity. There are many examples, and here’s one from Bloomberg, which wrote this from October 2016:

​“Earlier this year, One Kings Lane, the online home goods retailer once worth almost $1 billion, sold itself to Bed Bath & Beyond, one of the companies it was supposed to displace, for just $12 million.”

Nevertheless, bubbles have been part of economies for many years—from the tulip mania of 1637 and the Florida swampland craze of the 1920s to the dot-com bubble of the late 1990s and the asset backed securitizations of the mid/late 2000s.

Nonetheless, what do sensible and informed people do to preserve their purchasing power and wealth? Well, David Einhorn, manager of hedge fund Greenlight Capital Management, said this about fiat currency and gold:

​”The debate around currencies, cash, and cash equivalents continues. Over the last few years, we have come to doubt whether cash will serve as a good store of value. If you wrapped up all the $100 bills in circulation, it would form a cube about 74 feet per side. If you stacked the money seven feet high, you could store it in a warehouse roughly the size of a football field. The value of all that cash would be about a trillion dollars. In a hundred years, that money will have produced nothing. In a thousand years, it is likely that the cash will either be worthless or worth very little. It will not pay you interest or dividends and it won’t grow earnings, though you could burn it for heat. You’d have to pay someone to guard it. You could fondle the money. Alternatively, you could take every U.S. note in circulation, lay them end to end, and cover the entire 116 square miles of Omaha, Nebraska. Of course, if you managed to assemble all that money into your own private stash, the Federal Reserve could simply order more to be printed for the rest of us.”

​And, Alan Greenspan, former chairman of the Federal Reserve (the U.S. central bank), said this about gold relative to fiat currencies:

TETT: Do you think that gold is currently a good investment?

GREENSPAN: Yes… Remember what we’re looking at. Gold is a currency. It is still, by all evidence, a premier currency. No fiat currency, including the dollar, can match it.

If you’re still not convinced that the “full faith and credit” concept is slowly being eroded, then here’s Kyrgyzstan’s Central Bank Governor Tolkunbek Abdygulov (perhaps wiser than some other central bankers) reiterating the aforementioned:

​”Gold can be stored for a long time and, despite the price fluctuations on international markets, it doesn’t lose its value for the population as a means of savings…”

​Nevertheless, we are not ‘gold bugs’ necessarily; we do advocate storing one’s wealth in assets that have a better probability over the long run (that’s defined by one’s own circumstances) of maintaining purchasing power relative to that of fiat currencies. So, gold is one of many alternatives. Cows/chickens/goats, fertile real estate, select operating companies, and clean water sources are just a few examples that might be relevant based on where one lives. Naturally, diversification with respect to this strategy is prudent, especially when one lives in an environment with this occurring (since 1971):

​”We see that debt has shot up by a factor of 40 while income has only increased by a factor of 17. We have indeed grown our debts wildly faster than our income over the past 45 years.” 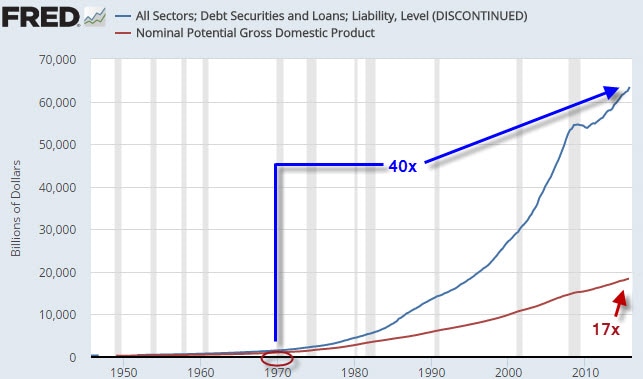