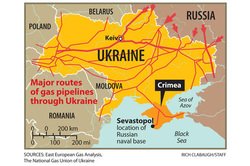 When in doubt, follow the money.  Accordingly, the recent confrontation between Russia and the Ukraine (and the West) has a lot to do about natural gas and energy, proxies for money.  And, apparently, Putin and the Russians are not known to be lenient with buyers who get too far behind in paying their bills, as was the case back in 2009 when Russia basically shut off the gas to Ukraine and much of the EU. So, one can expect some form of monetary bailout for the Ukraine so it can pay Russia for past due bills and to assuage Russia’s concerns regarding trade account delinquencies.

As such, below is a chart that depicts the reliance by Ukraine and Western Europe on natural gas provided by Russia.  It seems, in this instance, Russia is holding all the good cards, as they say.

Nevertheless, Russia and Western Europe (especially Germany) have been circumventing distribution routes through Ukraine and Belarus since 2009, as the illustration below depicts (circa 2009; natural gas capacity in billion cubic meters – “bcm” – for the Nord Stream, Belarus Route, and the Ukraine Route). 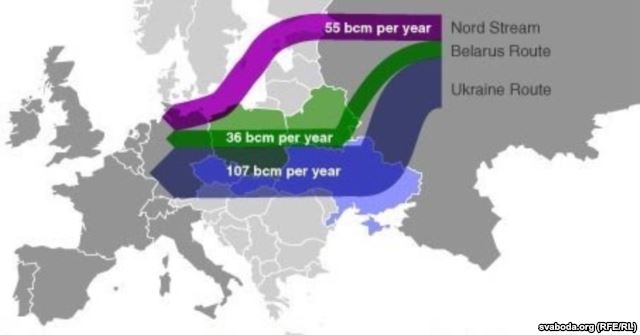