Skip to content
Although we at Coventry League try to think independently more often than not, we are aware that many prefer to outsource their critical thinking to broad frameworks such as political parties and whatnot.  Accordingly, below is a chart comparing the economic recession during the Reagan era to that of the Obama era (obviously still in progress).  The entire article titled “A Tale Of Two Recessions And Two Presidents” can be found at Investor’s Business Daily. 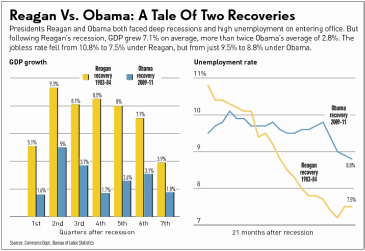