Remember Mr. Einhorn?  He is the manager who uncovered alleged fraud at companies such as Allied Capital and Lehman Brothers.  Before everyone and their brother realized these allegations were substantiated with clear and verifiable facts, the messenger was vilified.

Given this backdrop, what are some of Einhorn’s opinions and trades of recent? First, he is expecting a major currency collapse and a surge in interest rates in the next 3-5 years (see footnote below).  This is evidenced by his large allocation to gold and comments citing imprudent government deficits, among other examples.

Regarding the SEC, Einhorn is unyielding, opining in front of Congress about the SEC’s “crooked culture and lack of enforcement.”  Furthermore, he does not leave doubt regarding his thoughts about too-big-to-fail companies: “break them up.”  Edward Harrison, founder of the blog Credit Writedowns, summarizes these topics in an article at Seeking Alpha.

Einhorn’s thesis is based on Vodafone’s 45% stake in Verizon Wireless.  Essentially, the trade is considered a “5.5% Inflation Protected Bond with Free Non-Expiring Call Options.”  Market Folly summarizes the trade, including the slide below: 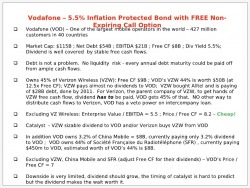 Market Folly: Katsenelson’s Vodafone Slide
Lastly, it may be worth the effort to conduct due diligence on Moody’s (NYSE: MCO).  Buffett has been dumping shares, while Einhorn has been increasing his short position…