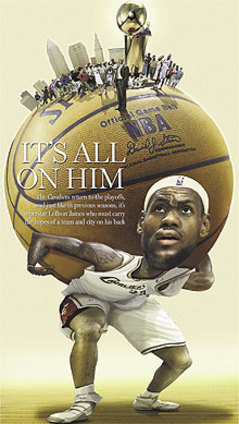 Ted Crow/The Plain Dealer
To many Clevelanders and Ohioans, the economy never recovered from the last recession, or several prior to it, for that matter.   Today’s headlines and stories in the Cleveland Plain Dealer highlighted the state’s 10.2% unemployment rate in April, exceeding the nation’s 8.9% rate.  Even worse, foreclosures and Sheriff’s sales in Cleveland have pummeled the median sales price of existing homes, down 73%, from $62,000 in 1Q 2007 to $17,000 in 1Q 2009.

Understandably, citizens have looked to a sports figure – in this case, the prodigy of Akron and Fighting Irish alumnus, King James – to deliver temporary relief in the form of an NBA Championship.  It was not to be.  Instead, fans were brokenhearted witnesses of the importance of team composition, despite the immense talents and leadership qualities of one member.

Accordingly, it’s a timely reminder to all, whether it’s a business or a sports team such as the Cavaliers, that to compete and succeed among the best, appropriate and complementary team members are vital.

That said, it’s not all gloom-and-doom.  Today’s headlines also mentioned that the Cleveland area has become the U.S. leader in Alpaca farming, and will host the Second Annual World Alpaca Conference this week, where Alpaca Farmgirl will be blogging and tweeting.

And, if that doesn’t adequately lift one’s spirits, then those “At Least We Are Not Michigan, err, California” bumper stickers might deliver some sort of consolation.