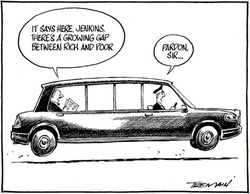 Growing Inequality by Bryce Edwards
Mother Jones magazine posted an informative infographic highlighting aspects of the U.S. economy from an inequality perspective.  Viewing it in its entirety is encouraged as it includes detailed sources and complements our prior blogs regarding perception (people actually perceive little economic inequality, when in reality it is severe) and owners of Congress (reasonable interpretation: major financial institutions).

Below is one illustration from Mother Jones. It reveals people’s perception about inequality and social stratification in the U.S. (click image to enlarge).  The data are attributable to professor Michael Norton of Harvard Business School and behavioral economist Dan Ariely of Duke University.

As some might realize from the illustrations, there is a winner-take-all arena in which citizens and companies compete, with notable legal and political protections available for the winners.  To wit, companies considered too-big-to-fail and citizens in the top 1% got bigger and wealthier, respectively, since the beginning of the 2007 recession.

Notwithstanding, we are not attempting to address the factors exacerbating the economic inequality and malaise; rather, we are deferring to the opinion of the Federal Reserve Bank of Kansas City President Thomas Hoenig who stated the following:

“I am convinced that the existence of too-big-to-fail financial institutions poses the greatest risk to the U.S. economy. They must be broken up. We must not allow organizations operating under the safety net to pursue high-risk activities and we cannot let large organizations put our financial system at risk.”

And, if these references are not enough, then here are two more sources:

So, if we can form any lessons from the recent riots and revolutions in the past year in Greece and currently in the Middle East, one should be that social stratification and inequality can only last so long until there is a backlash from the masses to restore balance.

Or, as they say In mathematics: reversion to the mean.

2 thoughts on “An Inquiry Into Economic Stratification”