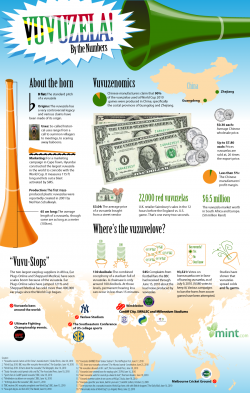 Many people viewed some of the games of the 2010 World Cup, including the championship in which Spain defeated the Netherlands 1-0. And, just as many people who were not at the stadium wondered what was generating the continual humming, bumble-bee sound. Well, it was the vuvuzela horn, and fans took liberty to explore the entire stadium space.

From an economics perspective, the World Cup created a noticeable trickle-down effect. As you review the accompanying infographic (click image to enlarge), you will notice the large number of horns sold, which caused a large number of – you guessed it – ear plugs to be sold.

Not all have been enthusiastic about the vuvuzela horns. Already, the horns have been banned at Yankee Stadium and throughout the Southeastern Conference (SEC) of U.S. college sports, among other worldwide venues.

Given the positive economic impact attributable to vuvuzela horns, where’s the vuvuzelove?