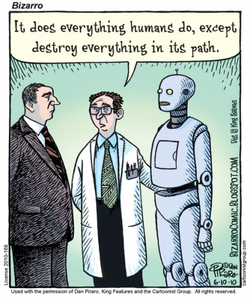 BizarroComic.blogspot.com
When comic relief is needed, the likes of Goolsbee, Bernanke and Fama is fine. However, if seriousness about a task or topic is warranted, then a genetic algorithm-based bot might be more useful, thankyouverymuch.

The cover story of Wired Magazine’s January 2011 issue is about artificial intelligence (AI).  I know, this topic might conjure up HAL 9000 from the 1968 science fiction film 2001: A Space Odyssey.  I suppose that’s not unjustified to do so.

Nevertheless, the initial story relates to how Kiva Systems set up a warehouse for diapers.com.  To a typical person, the inventory layout might have appeared haphazardly arranged, perhaps even to rational and efficiency oriented professionals such as finance and economics professors.  Yet, the organization of the warehouse was not based on human logic, but rather machine logic.  And, what is becoming exceedingly apparent, machine logic is excelling in many situations.

Furthermore, the cover story continues by including brief sections about Internet companies, financial markets, music, medicine, logistics, and fraud detection – essentially, a little bit of something to appeal to just about anyone.
………………………………………………..

●  Singer, PW. “PW Singer on Military Robots and the Future of War | Video on TED.com.” TED: Ideas worth Spreading. Apr. 2009. Web. 01 Jan. 2011. <https://www.ted.com/talks/pw_singer_on_robots_of_war.html>. Author shows how the widespread use of robots in war is changing the realities of combat. He shows us scenarios straight out of science fiction — that now may not be so fictitious.

●  Vaughanbell. “Seeing the Mind amidst the Numbers.” Mind Hacks. 22 Sept. 2009. Web. 01 Jan. 2011. <https://mindhacks.com/2009/09/22/seeing-the-mind-amidst-the-numbers/>. Blog article is about the Netflix Challenge that awarded a prize for the best algorithm that selects video suggestions for users. It also highlights the particular technique, called singular value decomposition (SVD).