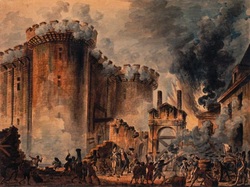 The Storming of the Bastille, 1789
The Guardian presented a concise infographic titled “Arab youth: the tipping point” regarding key factors indicating potential youth uprisings.  Two criteria are (a) percent of population comprised of youths and (b) their respective unemployment rates.  The latter are stated values.  It is likely those rates are understated, as they are in the U.S.

Based on the data, some of the ingredients exist for further youth uprisings in Northern Africa and the Middle East.  One factor not included is population density, which seems to act as a catalyst, as witnessed in the densely populated Egypt (primarily Cairo region).

So, who is most likely to be next after the revolution in Egypt?

2 thoughts on “A Tipping Point For Youth Uprisings”